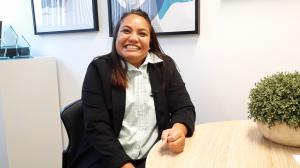 After four years out of the workforce, Kylie assumed she would never be able to return to her chosen career.

She thought returning to work at all was out of reach.

Kylie’s life changed after seeing a social media post from The Personnel Group.

“I found The Personnel Group on Facebook and rang the number. I didn’t have any idea of the concept of how they helped,” Kylie says.

“(Employment Consultant) Harley told me that this was a safe place,” Kylie says.

“There were occasions … when my mental health wasn’t very good at all, and it was very stressful.

“Harley helps me a lot. Whether personally and for my mental health too, he was really great.

“I’m not quite sure how you do your training, but it’s really empathetic, it’s really caring.

“It’s so exciting. I’ve been on cloud nine for a long time.”

Kylie worked in a frontline admin role at a private hospital before taking time away from work to focus on her health.

“I never thought that I would be able to do that again.” She says.

“I thought I wouldn’t be able to work again.”

Kylie says the support, advice and encouragement from The Personnel Group gave her the confidence to re-enter the workforce.

“Working allows me to pursue my outside dreams,” she says.

“This is the start of my independence. I’m looking forward to accomplishing things that I haven’t done in a long time.

“Maybe even go on holiday. That would be really nice.”

The little nudges and tips from her consultant helped build her skills and opened new possibilities, Kylie says.

“The Personnel Group is … I couldn’t say a bad thing at all; I would cry because I’ve never known that that’s what an employment agency can do for you.

“I can’t believe what The Personnel Group has done for me. It’s amazing.”